In 1883, Senator Thomas Palmer made a generous gift to the City of Detroit of more than 100 acres of farmland on the northwest border of the city for use as a public park. In 1915, the Palmer family sold land north of the Park to developer Charles W. Burton for a residential subdivision.

Planning this new 188-acre subdivision carefully, Burton strove to take advantage of the natural beauty of the rural terrain. Ads announcing the opening of the subdivision stressed “the charm of winding drives, wooded vistas and artistically grouped shrubbery… Situated next to Palmer Park and the Golf Grounds, fronting on Woodward Avenue, but screened from its dust and noise, Palmer Woods is a safeguard from the encroachments of commercialism.”

Over the years, other developers joined Burton in constructing homes in Palmer Woods, including two-term Detroit Mayor Frank Couzens who built 14 homes in the historic district starting is the 1920s.

Landscape architect Ossian Simonds laid out the streets of Palmer Woods as curving avenues, breaking the rigid gridiron tradition of Detroit. To control traffic patterns and maintain privacy, the subdivision contained few through streets. Building lots were irregular in size and shape, no two being alike. Names such as Gloucester, Balmoral and Cumberland reflect the influence of English history. Palmer Woods received the Michigan Horticultural Society’s Award of Merit in 1938 for being the finest platted subdivision in the state.

For a Powerpoint presentation on the history of Palmer Woods, created by Jed Durkin for the 2015 Palmer Woods Centennial Celebration, click here.

Palmer Woods contains many of the finest examples of creative residential design in the city because the development of the subdivision coincided with the rapid expansion of Detroit’s auto industry. In the early 1900s, many major executives from the growing industries built homes and lived a life of opulence and wealth in Palmer Woods. Once home to the Fishers, Van Dusens, Prentises, Sanders, and Briggs families, the classic heritage of this unique neighborhood is still appreciated by the current owners who reside in these magnificent houses.The works of internationally-acclaimed architects such as Frank Lloyd Wright, Minoru Yamasaki, and Maginnis & Walsh are represented in Palmer Woods, as well as many of Detroit’s most talented architects, including Alvin E. Harley, Clarence E. Day, Richard H. Marr, William Kuni, J. Ivan Dise, C. Howard Crane, Albert Kahn, Herbert and Frances Schmitz, and the firms of Pollmar & Ropes, and Bazter, O’Dell & Halpin.

The most prevalent residential style found in Palmer Woods is derived from the English Medieval and early Renaissance architecture of the Elizabethan and Jacobean periods (1588-1625). This revival of forms, generally termed Tudor Revival, was the most characteristic style found in Detroit from 1890 to 1930.

Active and meticulous restorations of homes are continually underway by neighbors who respect the historic integrity and significance of the structures. The responsibility for the preservation of these irreplaceable landmarks of Detroit history is shared by the homeowners and the Palmer Woods Association. 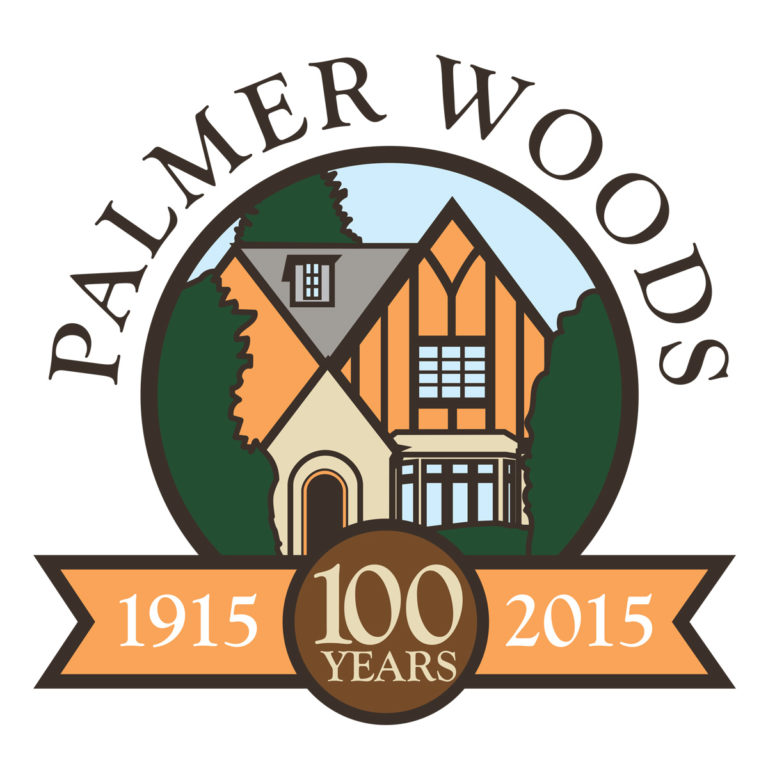 In 2015, Palmer Woods celebrated its 100-year anniversary. Palmer Woods was incorporated in 1915 and one hundred years later, we continue to live the dream of inhabiting beautiful, architecturally distinct homes amid a park like setting within the city limits.

During our centennial year, Palmer Woods hosted a number of themed events to celebrate the 100 years of our historic neighborhood, including a Garden Tour July 18, with a preview soiree on July 17, a 5K race throughout the neighborhood held on September 12, which was sponsored by St. John Health System, and a Centennial Gala on September 19th at the Detroit Golf Club. For the Centennial Gala Program, filled with more information on the Centennial Celebration, click here.

As part of this celebration, the History Subcommittee created a time capsule, neighborhood archives including information about architects who designed our homes, famous residents past and present, and much more. This information was compiled and placed on archive at the University of Detroit Mercy library. For a Powerpoint presentation on the history of Palmer Woods, created for the Palmer Woods Centennial Celebration, click here.