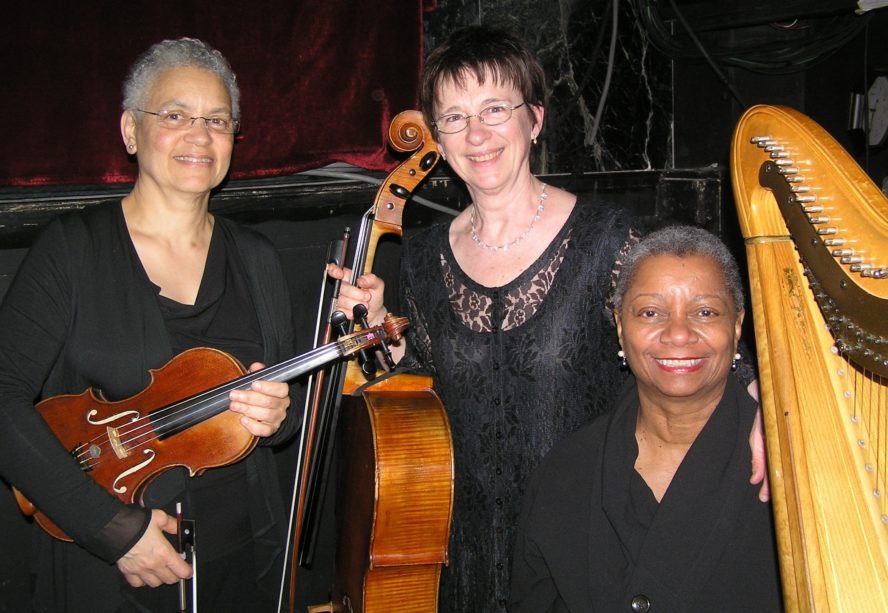 Harpist Patricia Terry-Ross, violinist Velda Kelly and cellist Nadine Deleury are virtuosic, longtime members of the Michigan Opera Theatre and also perform in the Detroit Symphony Orchestra and Chamber Music at the Scarab Club. They are especially passionate about playing together in the Eason Trio, expanding the chamber music repertoire for their instruments. If you have never heard this amazing Trio and this rare pairing of harp, violin and cello, then you are in for a real treat!

Terry-Ross, recently honored with the 2017 Kresge Eminent Artist award, has peformed on some of the world’s most renowned stages, including the Kennedy Center and Carnegie Hall, with luminaries such as Luciano Pavarotti, Sammy Davis Jr. and Johnny Mathis. She has been the principal harpist at the Michigan Opera Theatre for 40 years, beginning just five years after the MOT was founded, and has performed numerous times with the Detroit Symphony Orchestra. Her warm and vibrant sound can be heard on Motown recordings made in the 1970s with legendary stars, including Marvin Gaye and the Temptations.

Following in the footsteps of other pioneering harp stars such as Dorothy Ashby and Alice Coltrane, who honed their musical gifts at Cass Tech, Terry-Ross returned to Cass for 31 years to become an award-winning educator and director of the Harp and Vocal Ensemble, helping to empower a new generation of students to excel as artists and educators.

Co-artistic directors of the 20-year Chamber Music at the Scarab Club series, Nadine Deleury and Velda Kelly are well known for their innovative programming and outstanding performances. Principal cellist of the MOT, Deleury was born in France where she studied at the Paris Conservatory before coming to the U.S. to study at Yale University. Kelly has played with the Detroit Symphony Orchestra as a Music Assistance Fund Fellow for three seasons in the 1980s and now plays regularly with the DSO when needed. She holds music degrees from Boston University and the University of Cincinnati College-Conservatory of Music.

In 2006, the Eason Trio commissioned Naiades by University of Michigan composer Erik Santos and Water Music by Sally Lamb McCune in 2016. The Eason Trio’s MIH program will feature a variety of classical music, especially works written during the early 20th century and beyond. Tickets: $50; VIP seating in front rows with additional leg room: $60.