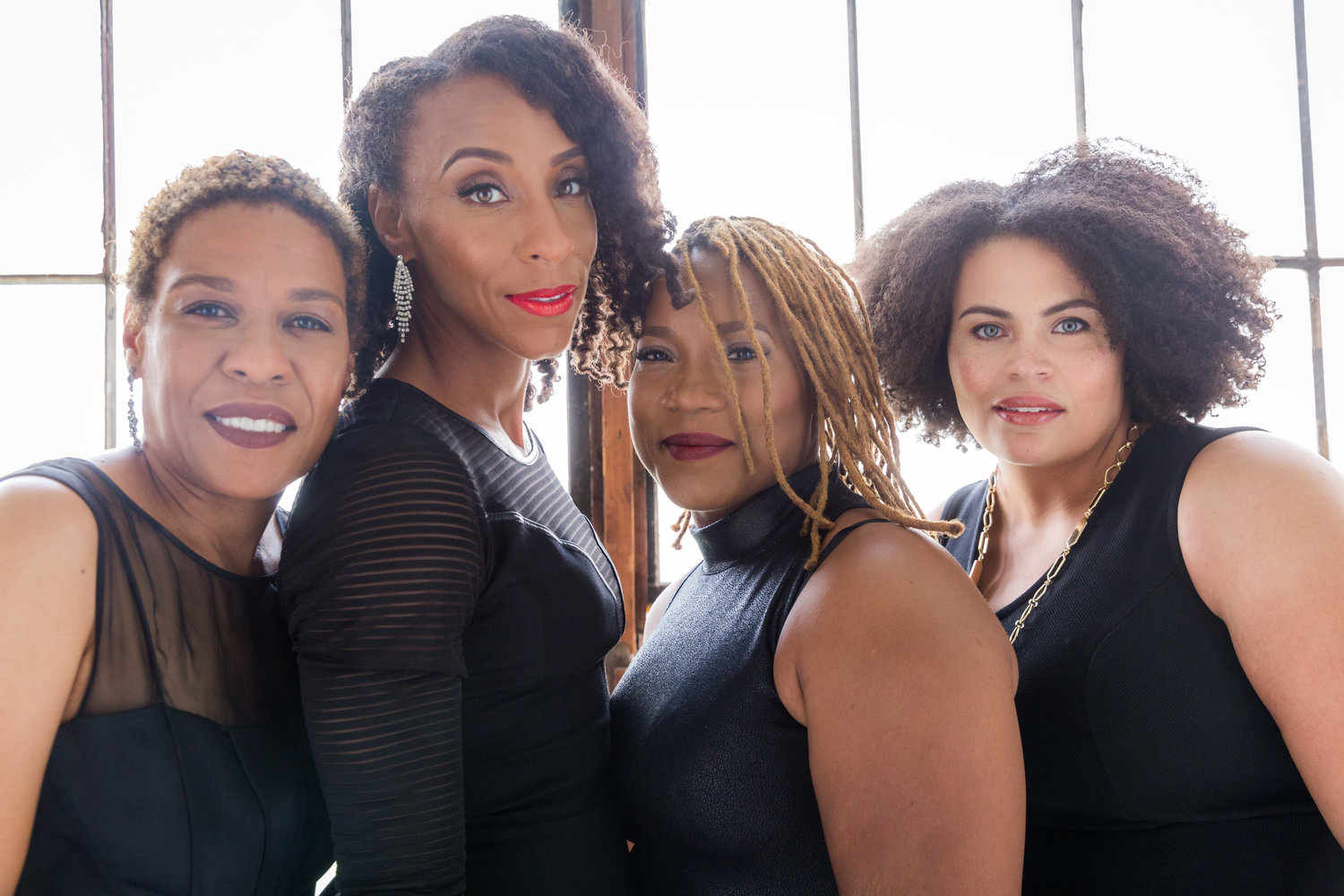 Musique Noire is “an assemblage of some of the finest musicians in the city; women with several collective lifetimes of musical experience, all versed in the international sounds of this sprawling metropolis …” (Marsha Music for Musique Noire’s mose recent recording “Reflections: We Breathe”).

Back in 2005, Detroiter Michelle May found herself playing in a variety of ensembles (classical, jazz, R&B, gospel and even a house music band). She felt it was time to take her musical life in another direction, and searched for a few like-minded, seasoned musicians from the Detroit area who felt, as she did, tired of always making someone else’s vision a reality and ready to let the world hear what they had to offer.

Putting together a band wasn’t easy, especially with the instrumentation assembled: violin, viola, percussion, guitar and bass. After going through a some personnel trial and error, Michelle was finally able to put together a group that works well together musically and personally. Musique Noire (French for “Black Music”) was born.

“… experience this magical, sophisticated chamber performance and be transported to many other lands via soulful, global Detroit.”

Musique Noire weaves elements of Spain, Africa, India and the Middle East into their sonic tapestry, within a firm foundation of jazz and blues. Their work has been recognized with nominations by the Detroit Music Awards as “Outstanding World Artist/Group” and “Outstanding World Recording” in 2018 and a number of times in prior years. In 2015, Musique Noire was also awarded “Best Black Female Band of the Year” at the Black Women in Jazz and the Arts Awards in Atlanta, Georgia, and the ensemble was among 2018 TEDx Detroit performers and presenters. Over the years, this group of veteran players has performed with high-profile artists, including Stevie Wonder, KEM, Aretha Franklin, El Debarge, and Frank McComb, among many others.

Michelle has been a performer, educator, writer and producer for over 35 years. She is the director of the Historic Boston-Edison Assocation “Sounds of Music” House concerts, a series inspired by the Palmer Woods Music in Homes series.

A multi-talented musician, she has performed live and in the studio with such nationally renowned performers as drummer/percussionist Francisco Mora Catlett, Marcus Belgrave, Smokey Robinson, Natalie Cole, Donald Walden, Barry White, Joe Williams and Dizzy Gillespie, among many others. Michelle holds a B.A. in Education and Music, an M.A. in Counseling (her “other” profession!) and a Certificate in Recording Technology.

Chicago-based JoVia Armstrong is an educator and songwriter, and a highly sought-after performer. She is a 2011 3Arts Siragusa Foundation Artist awardee, a presigious honor presented annually to women artists, artists of color, and artists with disabilities for their contributions to the health and vibrancy of Chicago. JoVia studied percussion at Michigan State University before relocating to Chicago, where she earned a B.A. in Music Business from Columbia College.

In addition to her work as performer, writer and producer with Musique Noire, JoVia has performed with such national and international artists as Amp Fiddler, Nicole Mitchell, JC Brooks and the Uptown Sound, the Chris Green Quartet, British artist Omar, Alison Crockett, Maysa, Eric Robeson, Rashaan Patterson, Trey Anastacio,  as well as at numerous Jazz and Latin festivals. She is known for her creative technique, stage presence and melodic approach and is versed in the styles of jazz, Latin jazz, Afro-Cuban, African, gospel and R&B. JoVia is currently a PhD student in the University of California Irvine’s Integrated Composition, Improvisation and Technology Program.

Detroiter Leslie DeShazor Adams is a graduate of the University of Michigan School of Music, where she received a B.M. in viola performance. While her training is primarily in classical music, her playing and writing reflect additional influences of Jazz, gospel, rhythm and blues, traditional West African music, and rock. She has worked with such artists as Fred Hammond, Donnie McClurkin, Three Mo’ Tenors, Dwight Adams, Alvin Waddles and many more.

In addition to her work with Musique Noire, Leah Lucas Celebi performs as a soloist, an orchestral musician and a performer of contemporary music in a variety of genres. Originally from Illinois, Leah graduated from the Chicago College of Performing Arts Music Conservatory and continued her graduate studies at the University of California Santa Barbara. She has performed with numerous national and international artists.

Bassist Marion Hayden (see page 25) and guitarist Elden Kelly joins Musique Noire for this concert. Kelly is a seasoned jazz improviser, band leader, and a highly skilled solo guitar fingerstylist, composer and songwriter. After graduating from Boston’s New England Conservatory of Music, he accepted a full scholarship and teaching assistantship at Michigan State with Rodney Whitaker, earning a graduate degree in 2011. He is an in-demand recording artist, performer and educator

Appropriately scheduled during Women’s History Month, this is certain to be a musical journey not to miss.